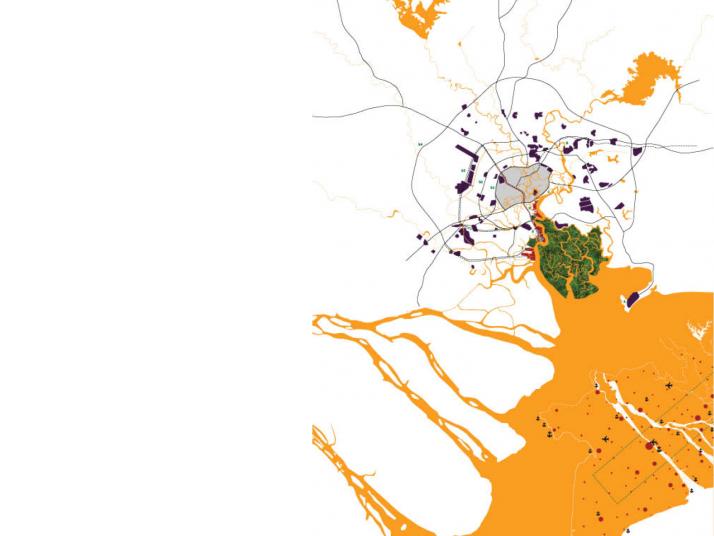 As the economic powerhouse of the country, infrastructure relations between HCMC and the surrounding territory are essential. In the periphery, concentric ‘belt’ roads structure chains of industrial parks. Termini of the belt roads are along waterways and seaport sites. The categorization/grouping of Vietnam’s ports works to increase collective efficiency. Within Seaport Group No. 5, HCMC will remain the urban port, Ba Ria-Vung Tau (A) the oil and gateway ports, and Dong Nai (B) ports for industrial park support. At the same time, decentralization of HCMC’s ports works not only to liberate center city sites, but further accentuates the notion of specialization – whereby Cat Lai (C) is to be a mixed use terminal and Saigon South (D) and Hiep Phuoc (E) are destined to be a general port and the city’s main container/passenger port. Logic could follow that a new third city port (F) – further south on the Soai Rap River could become the city main port tied to the inland waterway network linked to the Mekong Delta.

At the scale of HCMC, the logic of infrastructure is read to primarily be a structuring east-west access road, which when intersected by a new, north-south urban parkway and linked to the planned ‘belt’ roads/radials and the network of inland waterways would allow excellent connectivity of ports, industrial zones and urban quarters. The ‘red line’ of Hiep Phuoc development is a new infrastructure which operates at the city-wide scale. Morphological cohesion between infrastructure and urbanity is deliberate and opportunistic – vehicular movement and public transport is intelligently married with pedestrian circulation, augmented by auxiliary programs and an instrument to guide urbanization. The new HCMC Parkway connects the existing Tan Son Nhat Airport (soon to be the domestic-only terminal) with a proposed urban port on the Soai Rap River.

More than a mere road/tram line, the north-south parkway is tactically located to take advantage of existing ‘exceptional’ public programs, urban voids (reconfigured as public places) and amenities, topographical conditions and real estate opportunities. The parkway connects from the airport to such urban landmarks as Reunification Palace/Tao Dan Park and Ben Thanh Market/23 September Park, crosses the new urban extension area of Phu My Hung in Saigon South before terminating on the Soai Rap River. Sectional richness is explicitly designed and the landscape, street furniture, building edges and utilities below surface are to be built concurrently and thereby form a new system of transport, promenade, utilities and power. The parkway intertwines transportation infrastructure, recreational areas, platforms for city-scaled public programs, flood and drainage engineering and the creation of a scenic landscape. The parkway traverses scale – simultaneously particular and comprehensive in scope and local and metropolitan in impact. Urban planning, civil and sanitary engineering and landscape architecture are folded into one another as are concerns for mobility, health, recreation and scenery.